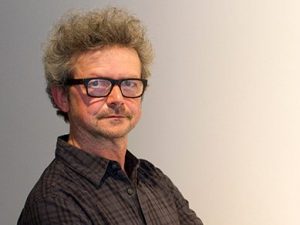 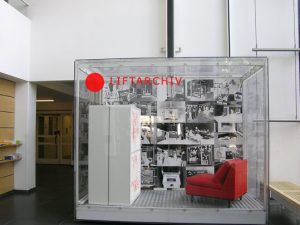 The LIFTARCHIV (www.liftarchiv.de) is a platform to test out the possibilities for making art within an institutional or public domain. It explores issues around intervention and decoration, collaboration and critique. We didn’t want to make a participatory work. The context of the Kreisverwaltungsreferat is difficult because of the massive politics related to the place. Therefore we tried to insert this parallel structure into the context of the space. The LIFTARCHIV consists of a moving glass elevator cabin and an archive inside, situated in the foyer of the Kreisverwaltungsreferat, the Munich district authority, which for example houses the Munich registry and immigration office as well as the election office. One of the main activities of the host institution is the administration of migration as well as cross-border travel, which on the one hand regulates German travel abroad as well as travel, residence and mobility of foreigners in Germany.

The lift cabin presents an archival structure within the ‘institutional archive’ and serves as a mobile interactive sculpture. Designed to travel up and down one of the walls of the foyer of the institution, it is used as a platform for a series of presentations and events, programmed over the project period of four years. It consists of a series of screenings, talks and performances. For each event the institution opens its doors after office hours and transforms itself into a new venue, where different people can meet. The lift cabin also mimics the architectural features and themes of the authority building. The institution tries to be transparent and customer friendly, and the LIFTARCHIV mirrors this with its literal transparency, openness and mobility. But at same time it appears non-official, non-functional, an absurd feature in the environment.

So far our relationship with the actual host institution, the KVR, has been difficult but productive, and we came to understand, that it is probably symptomatic for the difficulties of the issues that are related to the location, the tense and heated debate around the issue of immigration. We found that we constantly had to re-define the purpose of the project and to re-negotiate its conditions of existence. However, this difficult dialogue with the institution has become an integral part of the process of the work. The centre of the project has become an ongoing collaborative process and a conflicted dialogue, but also an attempt to create an interface between the institutions, the public, us and other artists and groups. The LIFTARCHIV became a tool for negotiating our relationship as artists with the institution, its employees and customers. It represents an interface for the complex issues related to this location: the issue of immigration and its administration, that doesn’t allow simple answers. Therefore we are less interested in finding answers, but rather in starting a process of movement, like the rise and the descent of the lift box, symbolic for the rise of wishes and hopes, their symbolic language, their reflection and deconstruction.