TACOMA, Wash.— For years, bits and pieces of what has loosely been termed unofficial Soviet art have appeared in American galleries and museums. The names of Ilya Kabakov, Erik Bulatov, Vitaly Komar and Alexander Melamid were the only ones to become familiar in the United States, but it was clear from their works that many alternatives to official Socialist Realism existed. The question for outsiders was: What did these alternatives look like?

It took Mikhail S. Gorbachev’s rise to power for an answer to emerge from the private apartments that had been the only places unofficial artists felt free to exhibit. Suddenly, it seemed, the Soviet Ministry of Culture began to promote paintings by people who, just a short while before, had been denied access to materials, gallery space and professional positions.

To the list that had included hardly more than Mr. Kabakov and Mr. Bulatov were added names from a younger generation – those of Sergei Volkov, Andrei Roiter, Alexander Brodsky and Ilya Utkin, for example. Unofficial art became official art, after a fashion, for it reflected the spirit of openness and change that Mr. Gorbachev embodied.

In the United States, Soviet art began to appear with greater frequency. Whether it was in honorable but ill-conceived efforts like last year’s ”10 + 10” exhibition at the Fort Worth Museum of Modern Art or the provocative ”Green Show” at Exit Art, a Manhattan gallery, Soviet art became a topic of widespread interest.

Yet not until ”Between Spring and Summer: Soviet Conceptual Art in the Era of Late Communism,” at the Tacoma Art Museum (through Sept. 9), has the subject been explored with something like the depth it demands. This is an intelligent and tough exhibition in which much of the work looks as grim as it is meant to look.

The exception in this respect is Mr. Kabakov, who remains the most poetical and important of contemporary Soviet artists. But as can be seen here he presides over a generation of intriguing younger creators. Among them is the team of Mr. Utkin and Mr. Brodsky, whose crumbling architectural installation with reflecting pool is a masterpiece of illusionary effects (and whose fantastical prints, on view in Seattle at the Linda Farris Gallery, evoke Piranesi and Edward Gorey in equal measure).

The show has been organized, as part of the Goodwill Games Arts Festival, by the Tacoma Museum and the Institute of Contemporary Art in Boston, where it will be seen from Nov. 1 to Jan. 6, 1991. (The tour concludes at the Des Moines Art Center, Feb. 16 to March 31.) David Ross, of the Boston museum, led the team of curators who put together the exhibition, which includes the work of some 30 artists, many of whom collaborate in groups with such names as Medical Hermeneutics and Collective Actions.

Emerging from ”Between Spring and Summer” is not a picture of the entire gamut of unofficial Soviet art, but a cross section of the activity that so far has seemed most intriguing to Westerners. The attraction has no doubt stemmed from the distinctly political character of much of this art, not only because political art is so much in vogue in this country at the moment but also, and perhaps more important, because in this sense Soviet Conceptualism can appear to be a revival of the Russian avant-garde that was crushed in the 1930’s. There is certainly a link in the Soviet Government’s relationship to the two, which is to say that the work of the Conceptualists today, like the work of the avant-gardists of the 20’s, may privately be disliked or distrusted by people in the Kremlin, but it is tolerated for reasons of politics and public relations.

The similarities between the two artistic movements extend to the emphasis on collectivism and to the notably egalitarian participation of men and women. Like the Constructivism of the 20’s (fittingly, the subject of an outstanding exhibition titled ”Art Into Life,” at the Henry Gallery in Seattle, through Sept. 2), Soviet Conceptualism opposes the style of realism that became the only acceptable mode under Stalin. Attacks on official Soviet art and culture recur in the works of contemporary artists as different as Larisa Zvezdochetova, Mr. Volkov and the team of Mr. Komar and Mr. Melamid.

Decay, illness, poverty, and dislocation, both physical and psychological, are themes at which the contemporary artists constantly hammer away, and for this reason especially the works are difficult to embrace. Peas ooze like pus from the inside of a bone in a work by the Peppers, the husband-and-wife team of Oleg Petrenko and Ludmilla Skripkina. Worm-covered jars and a bottle half-filled with an unidentified brown liquid are part of ”Pure,” a piece by Igor Makarevich and Elena Elagina. Layers of wax resembling a mass of melted cheese drown a Bible in Andrei Filippov’s ”Old Testament.

Sergei Mironenko’s response to the war in Afghanistan is ”Room for a Hero,” which consists of a hospital cot on a low platform with a chain at the foot of the bed. The irony is obvious. Appropriately, the walls of the museum’s galleries have been coated with a sickly shade of blue that is meant to evoke the look of Soviet communal housing and hospitals.

Irony is a common device for many of the artists in ”Between Spring and Summer,” among them Timur Novikov, whose quilts adorned with tiny battleships take a swipe at the Soviets’ typically heroizing portrayals of the military. In this, too, the contemporary Conceptualists differ from their often guileless Constructivist predecessors.

But perhaps the most striking difference between the two groups is in their attitude toward the issue of audience. While the Constructivists advocated art in the service of the masses, the Conceptualists in ”Between Spring and Summer” seem to return often to the notion of art as a private occupation. Whether in its making or its contemplation, art frequently serves for the contemporary artists as a symbol of escape from numbing communal existence.

In the performances of Collective Actions, for example, emphases on chance, impulse and randomness (interests derived partly from a study of John Cage) can be seen to represent alternatives to a rigidly ordered Socialist existence. The importance of personal history, as opposed to the history of the state, is explored most eloquently in the work of Mr. Kabakov, but it is also a concern for younger contemporary artists, including Maria Serebriakova and Sergei Anufriev (who is known as Africa).

And in the monochromatic canvases of Vadim Zakharov, there is an introspection bordering on obscurantism, as if the painter wished to flaunt his inaccessibility in the face of a society that has made accessibility an artistic prerequisite.

The temptation for a Western observer is to draw analogies between the private, painterly aspects of Mr. Zakharov’s work and the work of an artist like Jasper Johns. But ”Between Spring and Summer” is ultimately a reminder that contemporary Soviet art remains largely a domain unto itself.

Having been created for the small groups of like-minded viewers congregating in the artists’ cramped apartments, Soviet Conceptual artists have had little concern for the issue of finish that affects Westerners who must satisfy the demands of a market. Nor have most of them had access, until lately, to the materials they would need to create what people in the West call polished objects.

But most important, Soviet artists have treated the specific problems of Soviet life as their primary subject, and this has made comparisons with works of Westerners treacherous. Medical Hermeneutic’s Christmas tree surrounded by stuffed animals would seem to echo the work of Jeff Koons in its tango with gluttonous consumer culture. But it is more likely the reverse: a symbol of the longing for both tradition and plenty that – as the works of so many of the artists in ”Between Spring and Summer” make clear – has come to characterize the Soviet experience.

Photo: ”Space Bridge,” by Avvakumov and Podyomschikov-at once a homage to Constructivist design and a symbol for the collapse of the Constructivist dream (Richard Nicol/Tacoma Art Museum) 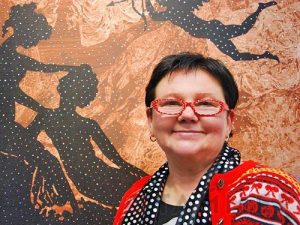